The Chocobo is an ostrich-like mob that is capable of semi-flight added by Torojima's Chococraft mod, of which it is the main focus. A Chocobo can be tamed, saddled, ridden, and named. Each color of Chocobo has its own special traits and abilities.

Chocobos shed Chocobo Feathers constantly. This makes Chocodisguise Armor and other items using Chocobo feathers (and some that use Vanilla Feathers) easy to obtain when a Chocobo farm is created. You can find Yellow Chocobos relatively easily, but other Chocobos are either extremely rare or only obtainable through breeding.

Chocobos can be controlled if the player places a Chocobo Saddle on the Chocobo. They can also be told to stay, follow, or wander via right-clicking with a Chocopedia. The Chocobo must have been tamed with Gysahl Green before riding, saddling, or instruction will be unsuccessful. Once a Chocobo is mounted, it may be dismounted by right-clicking.

The Chocobo Saddle can be crafted using Leather, String, and a Chocobo Feather, which, as stated below, drop fairly often by Chocobos.

One could also craft a saddle together with a Chocobo Feather.

As reloading a chunk causes Chocobos to reset to wander, a player who would rather the Chocobo to not wander off but hasn't built any form of containment can use a saddle

Chocobo Pack Bags offer twice the storage of a Chocobo Saddle Bag, but cannot be used with a saddle; keep in mind that a Chocobo can be commanded to follow you with a Chocopedia.

A Chocobo must first be tamed by being fed around 1-4 Gysahl Greens. A tamed Chocobo will have a red collar around its neck. Once tamed, Chocobo saddles can be used to ride Chocobos and a Chocopedia can be used to change a Chocobo's name and set it to "Follow," "Stay" or "Wander." This can also be accomplished by right-clicking the Chocobo with a Chocobo feather. Wander will not work if the Chocobo is wearing a saddle.

Golden Gysahls and Loverly Gysahls can be fed to Chocobos to set them to breeding mode. To increase the chance of obtaining Lovely Gysahls and Golden Gysahls, it is highly recommended to use a Lilypad of Fertility, which notably increases the chances of getting rarer farm drops. Lilypads of Fertility can often be found in Battle Towers or can be crafted from common brewing ingredients and a Lilypad.

Male Chocobos can be distinguished from females by their mane of rainbow colored feathers. After a Chocobo has bred and produced a "Chicobo", it will have a short "cooldown" time where it cannot be bred, similar to Vanilla Minecraft animals. While a Chocobo is recharging, it will read "cannot breed" next to its sex when right-clicked with a Chocopedia. When a Chocobo can be bred, it will read "can breed" instead.

The different species of Chocobos are attainable through breeding. There is a 20% chance when using Loverly Gysahls that a mutation will occur, resulting in a different color of Chocobo. This chance of mutation can be increased to 50% with the use of Golden Gysahls. Gysahl Cake can be used to instantly grow your Chicobo.

Here are the possible Chocobo breeding mutations as stated in the Chocopedia:

To enable the offspring to mutate into a Golden Chocobo, the use of Golden Gysahls is mandatory.

The Chocopedia may be used to rename the Chocobo, command it to wander, stay, or follow the player, and more.

To craft the Chocopedia, you will need 4 Chocobo feathers (both tamed and wild Chocobos will drop these every few minutes as well as upon death), 1 Gold Nugget, 2 Ink Sacs, 1 Lapis Lazuli, and 1 Book. 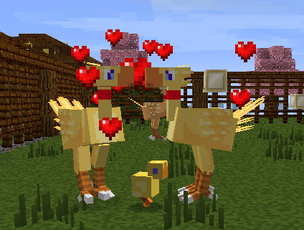 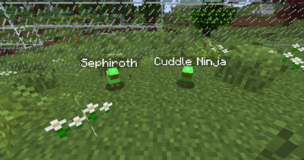