1 of 9
Add photo
The Chocobo is a large, flight-capable, ostrich-like mob added by the Chococraft mod (by Torojima) of which it is the main focus. They are tamable, saddlable, ridable, namable pets; each color has its own special traits and abilities.

Chocobos can only be controlled if the player places on the Chocobo, a Chocobo Saddle.

The Chocobo Saddle is craftable, using Leather, Strings and a Chocobo Feather, which are dropped fairly often by Chocobo's without the need to kill them.

You can also use a saddle with a chocobo feather.

Chocobos can be tamed by feeding them between 2-4 Gysahl Green. A tamed chocobo will have a red collar around its neck. Chocobo saddles can be used to ride chocobos and a Chocopedia can be used to change a chocobo's name and set it to "Follow," "Stay" or "Wander." Wander will not work if the Chocobo is wearing a saddle. Since reloading a world causes Chocobos to reset to wander, if you want them to stay where you left them you can use a saddle. Golden Gysahls and Loverly Gysahls can be fed to chocobos to set them to breeding mode. Males can be distinguished from females due to their mane of rainbow colored feathers.

The different species of Chocobo's are attainable through breeding.There is a 20% chance when using Loverly Gysahls that you will recieve a different color Chocobo and a 50% chance with Golden Gysahls.

Also Gysahl Cake can be used to instantly grow your baby Chocobo, to make it fully grown.

A Chocobo pen can be any size and made with any materials as long as the floor is covered in straw and there is a cauldron filled with water.

This is because if a hurt Chocobo stands on the straw near the cauldron it will automatically heal over time.

Gysahl Cake can be used to instantly grow your baby Chocobo, to make it fully grown. However, you may only grow it if you have already tamed it. Give it a few seconds before the gysahl cake kicks in to grow the baby Chocobo.

Chibi Gysahl can be used on a baby Chocobo to make it stay a baby, until it is fed a Gysahl Cake.

Some baby chocobos will not grow up if you are using fences. This is because the Chicobo is stuck inside the fence block. If you are experiencing this problem simply break the fence and push the chicks out and they will instantly grow up.

Furthermore, baby chocobos tend to run off into blocks and sometimes even into the ground. If the chocobo gets stuck, break the surrounding blocks to free it. It is suggested to breed chocobos with a bit of open space, tame the baby immediately, and then feed it a Gysahl Cake.

Chocobos (and Gysahl Greens) are from Final Fantasy.

Wearing the thief armor while on the chocobo will transfer the speed effect onto the chocobo. 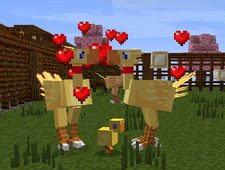 Add a photo to this gallery
Retrieved from "https://hexxit.fandom.com/wiki/Chocobo?oldid=33767"
Community content is available under CC-BY-SA unless otherwise noted.