This article is a stub. You can help Hexxit Wiki by expanding it.

A Meteor Timer, from the Falling Meteors mod, is meant to help find meteors. It is a flat block that somewhat resembles the size of a Vanilla Daylight Sensor, but is two bits taller.

The Meteor Timer has two modes, Quick Mode and Power Mode, that can be toggled by right-clicking the Meteor Timer. toggled, it will display a message to the user in the chat menu saying what mode it is in currently.

On Quick Mode, the Meteor Timer sends out a Redstone signal just before the next meteor is about to hit, making the meteor a bit less known but allowing creations using the Meteor Timer to be more compact, as one does not have to worry about the signal setting anything off until the time when the meteor hits.

Note that one can use Fallen Meteors instead of Meteors. 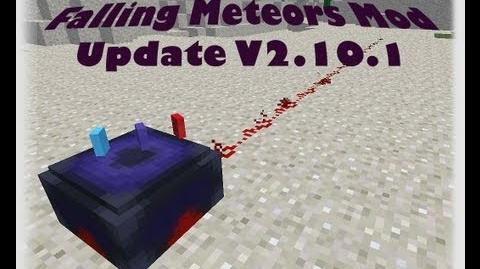 Retrieved from "https://hexxit.fandom.com/wiki/Meteor_Timer?oldid=80099"
Community content is available under CC-BY-SA unless otherwise noted.