Abilities: Collision, Teleport, Fireball  During the Second phase, instead of calling allies, Pharaoh will attempt to call fireballs down upon a player.

Abilities: Collision, Teleport, Raise Ally, Fireball  In the final phase all abilities are present and are used more often.

See Image Below. Place Torches in an ankh formation. Finally, place the Jasper Block in the ankh's head. The summoning ritual will then begin. Sandstone blocks will start spawning in the shape of a small pyramid-like structure. Breaking the block at this point will stop the ritual, though the sound will still play. After the sound stops playing, the Pharaoh will make a loud "roar" sound. 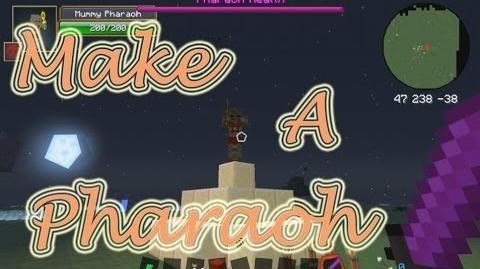 Hexxit Guide to Summoning the Pharaoh.
Add a photo to this gallery
Retrieved from "https://hexxit.fandom.com/wiki/Pharaoh?oldid=85136"
Community content is available under CC-BY-SA unless otherwise noted.