Pirates are hostile mobs found in various types of Ships generated by Better Dungeons. They resemble Steve with a black beard and they wear full armor of same type (Leather, Chainmail, Iron, Gold or Diamond). They have a primary weapon,which is a sword of the same material as their armor (Wooden sword for Leather armored Pirates,Stone sword for Chain mail armored Pirates), and some have a secondary weapon. The secondary weapon is randomly picked, and can be a Revolver, HookShoot, Shield or other compatible items. They have 20 health points (10 hearts) which is the same as the player. Their swords have a chance to apply Nausea and deal damage based on the type of sword they are carrying. They often drop ingots or gems based on their armor (iron ingots for iron armor, diamonds for diamond armor, etc.), melon slices, and Essences. If they go in water, they will spawn a boat and ride it in water.

Pirate Gunners are equipped with a Revolver.They will keep distance and shoot you.

Pirate Healers have Gold Armor and carry a Healing Staff.They heal other pirates at a steady rate.

Pirate Spearmen have Iron Armor and an Iron Spear.They have higher range than other pirates,making it easier for them to hit you.

Pirate Berserkers are equipped with aGiant Sword.They rush at the Player dealing lots of damage.

Pirate Defenders wear Gold Armor and carry a Gold Sword and a Pirate Shield.They can reflect arrows and block melee damage with the shield.

Pirate Bannermen hold a large banner which grants nearby pirates infinite strength,speed and resistance effects until their death. 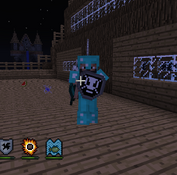 A pirate defender
Add a photo to this gallery
Retrieved from "https://hexxit.fandom.com/wiki/Pirate?oldid=86956"
Community content is available under CC-BY-SA unless otherwise noted.