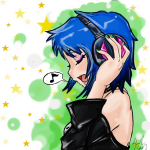 My name's Tess and you can find me on Minecraft under the nametag of Tess_Verres (what a suprise). I love playing the game as it's got so much room for modding and development. The whole open world sandbox just appeals to me so much, and it does have it's own "quests" if you will regarding the end-game stuff.

So I play a few modpacks here or there, usually the Tekkit stuff, but on occasion whatever happens to be hosted by server such as Craftland (Which is the ONLY SMP Aether mod out there by the way, but watch out for a guy named Handyman. He's sexist towards girls and openly admits it. Don't let him ruin your fun though.), or maybe something I'm not sure is a "server" like Ultra Hard Survival 2. It's only filled with friends so I'm not sure if it's rented or run, since it's up like 24/7. Never bothered to ask.

I also love helping people, as it gives them a chance to learn and use what they learned to better themselves or apply it in the future, etc. When it comes to Minecraft however, I help as much as my available resources can. I am VERY stingy though, since I have lost too much progress myself from helping others, or "borrowed items" that were never returned.

On the Wikia, I try to help out as much as I can, but I have a very short attention span. If you need proof of this, you can see that I haven't gotten that "edit pages 5 days in a row" badge thingie, as I never really remember to/really care to that day. You can find a couple of pages that I set as my favorites due to how much effort and work I tossed into those. Sadly, you'll note one of them I forgot to log into and did a really massive edit, but not under my name.

When it comes down to editing a page, usually I make those huge edits, as I have a lot of discoveries I've made, or the page is massively incomplete when I get to it. Usually, you guys (the editors) do a good job on a bunch of pages, but then there are times I've never heard of it so I don't know if there's improvement or not. Anyway, these edits usually comes with hours of research and data that I take into account, so if you find ANYTHING wrong, feel free to update it as I probably mixed up numbers or sentences somewhere.

I should probably add that when I make my edits, I NEVER do any summaries. It probably pisses some people off, but I just forget that it's there. Plus with MY edits, there is no summary. You can't summarize an entire article.

This is here 'cause I practically wrote everything on it at the time (Though I forgot to log in when I wrote about half of it). A good amount of credit goes to the previous people who had already gotten some of the info on it, those who added stuff after I posted this, and those who helped upload images for the crafting GUIs, because I can't seem to find the good quality thumbnails ANYWHERE.

Once again, due to the amount of work that I've put into the research. Granted, most of the writing was a bit of rewrites, additional info, but about a few hours went into the work of studying those bushes and their drops.

A little bit of work, but I honestly like how it turned out. There's only so much you can do with one berry and it's source, but oh well. Not one of the massive scale, but it's large compared to the small edits I make. I think I forgot to clear the Stub or the Cleanup thing though. Oh well.

Definitely gotta go with this, since SSP and SMP is way too easy. Hardcore is just dumb, since you lose the world should you die. I hate those one-time things, it ruins the fun and feels more like it's a grind-y type thing. One mistake can cost you hours/days of work. ANYWAY, UHS2 adds a lot of new mobs, and throws in a few other mods to help you survive. The "server" I'm on disabled all the vanilla recipes regarding the basic tools, and you are forced to use Tinkers' Construct to use tools. I feel like it's a nice touch, since it actually makes you craft the pieces and take the time to put it together. A bit more realistic, 'ya know?

This one I just loved due to the sheer "magic"-type thing. I'm not one to sit there and build machines all day, I'd much rather use my magic to do stuff. Now I'm not saying I won't set up machines to help further my magic, but it's not a priority if I have a nice start. Yes, I know it's "broken" with how easy it is later on, but that's usually when I lose interest anyway, as I've pretty much built everything else before I finish this and get to building 20 sets of power flowers.

I know this one's low on the list, but location on the list makes no difference. I liked how the pack was set up with the mods. I saw that EE2 was out and EE3 (which I know was beta still) was in and figured that I'm in for a rough ride. Well, without the ability to transmute anything (easily), I did have a hard start, but I caved and built the machines to further my progress. Found the Modular Powersuits, and made that my goal to finish that and make myself as OP as possible. I literally spent months mining, dimension hopping, and I even delved into Mystcraft to see what that was about. Never got the true hang of it, but I have the gist of it. Eventually, I got my suit up to about 95% of where I wanted it. Any higher, and the suit would be too heavy. At this point, I'm pretty much the Queen B***h of the Universe anyway: Virtually infinite Railgun/Plasma Cannon, uber mining speed, accelerated move/sprint, etc. I was untouchable. Then the fun ended. Never made it to the moon, but I'm sure that it would have been the same anyway.

This one's a bit special. It's the Aether mod, except that it's SMP. Currently, there's no public release for a SMP for the Aether, but it was done by the server owner. It's been so long since I was on there that I forgot his name. Anyway, it's pretty much just that. Multiplayer Aether. I made a bunch of friends there and had a great time.

--Incoming rant about people, skip if you don't care about it--

However, I started to find out what was going on in the Mods/Admin scene. Remember that "Handy" guy I mentioned? How I said to not let him ruin the fun? Try not to, for your sake. He was a prick from the start but I pushed through it. Normally, you'd say "he's just a player, screw him". Well he's an admin, so it's harder to say that. He's not THE admin, but he's one of them. Sexist, and open about it, a bit of a prick, and honestly I want to say corrupt with power. Well one of my friends got removed from admin status (details are fuzzy), but it was over an argument and apparently Handy had gotten one of his friends who was another admin to vouch for him. I seriously think they both had kissed a** to the owner, cause there's no way that what happened was right. But that's enough of my rant.

I really like this mod. I was introduced to it way too early, when Technic was still a thing. Problem was that the Emeralds spilled-- I mean that I was exposed to EE1 first, which was a LOT more simplistic than Thaumcraft. I remember being attacked by flying purple Flint and that there was at the time "pillar thingies", and the Flint zapped me from there or whatever. I gave up and said screw it. It didn't have the cool things I could do like I could in EE1. It was a mess. Now that I'm actually playing through it (but to be more fair it's Thaum 3), it makes more sense. And to be even more fair, that had to have been like what? 5-6 years ago? I was young and impatient. Thaumcraft is really fun, it actually makes me work for my things, rather than generate it from the sun or whatever. It doesn't have god-tier items, and there are consequences for doing things wrong, prompting you to minimize waste, make less mistakes, etc., thus making me actually pay a lot more attention to it. Because of this, and all the research I've done, I feel like I can say that I have a really good grasp of this and that I have actually accomplished something rather than put together a bunch of matter, whether it be sun particles or diamonds, dirt and lots of rocks to make a red ball. I took the time to study the elements, and to actually craft it using said elements. Again, it's not god-tier so it's not game ending and fun ruining, it's just right.

At this point, I'm out of mods/packs, but there will be more to come (should you be interested)!

Retrieved from "https://hexxit.fandom.com/wiki/User:Kara_Noelle?oldid=84640"
Community content is available under CC-BY-SA unless otherwise noted.